Recently, we took a look at some ways to inject holiday spirit into your SEO and digital marketing tactics. During this discussion, we explored a couple holiday digital campaigns from companies like REI, Coca-Cola, HotelTonight and others. I wanted to look at some more examples of nice holiday marketing campaigns, as well as some naughty ones (in one campaign’s case, very naughty.)

Exploring these past campaigns can give great insight into what to do and not to do with your own holiday marketing efforts. Hopefully, one of these examples sparks an idea in your own head about what may work for your brand during this crucial time of the year.

Each campaign showcases a unique lesson that digital marketers can take away and use to elevate their own strategies.

Google’s Santa Tracker has been a popular attraction at Christmas time for years now. It was modeled after NORAD’s Santa Tracker and then completely replaced in 2007. As the years have gone on, the Santa Tracker team at Google has added more features and made the experience more accessible and intuitive.

Each year, Google finds a way to add a little more magic into this tool, which has become a favorite attraction of children and Christmas lovers alike.

The real power of this fun, interactive tool, from a marketing standpoint, is its ability to tap into that mystical, childhood belief of Santa Claus and then use it as a platform to teach kids about geography, the Internet, search and other elements connected to Google and its products.

Takeaway: The holiday season is ultimately about the kids. You can never go wrong creating something fun and interactive that stimulates that holiday spirit in young (or old) audiences. Google’s Santa Tracker is also a great example of using marketing to educate instead of sell.

Coca-Cola rarely misses at the holiday season. With the help of polar bears and Saint Nick himself, they’ve become almost as synonymous with Christmas and the holiday season as candy canes and gingerbread houses.

Thus, it is rare to see them end up on the marketing naughty list. In 2016, the Russia division of the Coca-Cola marketing team made a series of major blunders that landed them in serious hot cocoa.

The advertisement ran as part of their Christmas wrap up heading into the New Year. It was designed to show Russia wrapped in a winter wonderland with the message: “Celebrate winter holidays from Moscow to Vladivostok.” Seems festive, right? 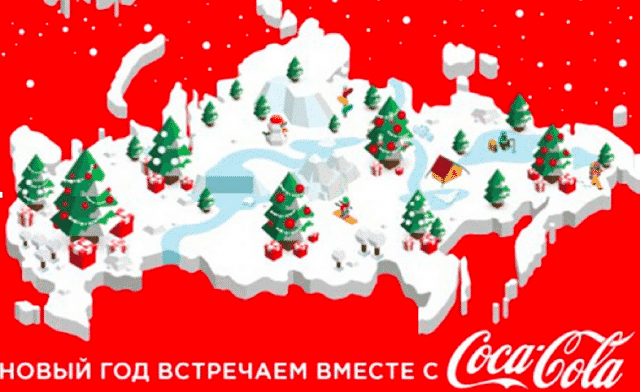 The issue, as Coca-Cola quickly found out, was they didn’t include Crimea as part of the original advertisement. Crimea has been heavily conflicted area with both Ukraine and Russia laying claim to the territory.

Russians took to their social media channels and blasted the soft drink company. Coca-Cola then released a revised map that did include Crimea (pictured above). While this appeased Russian audiences, it created an entirely new outrage from Ukrainians. It appeared that Coca-Cola was taking a political stance on this dispute in favor of Russia.

Coca-Cola issued an official statement from their Atlanta, Georgia headquarters apologizing and claiming that the second, revised map was created and posted without knowledge or approval from HQ, but the damage had already been done.

Takeaway: If you operate globally and use different marketing teams in each location, make sure everyone is on the same page and creating a consistent brand message. Otherwise, you could find yourself accidentally taking a political stand! After the Crimea fiasco, Coca-Cola created its “Taste the Feeling” campaign, which was designed to create a one-brand-one-message strategy to avoid similar issues in the future.

Fans of Nick Offerman, particularly his famed character in NBC’s Parks and Recreation, Ron Swanson, know his love of whiskey. Offerman is especially known for his penchant of one particular whiskey: Lagavulin. He was the perfect spokesperson for the brand during their 2015 holiday campaign.

Ironically, for being the spokesperson, Offerman didn’t speak at all. Instead, he sat silently in front of a roaring fire, in a leather armchair and sipped his favorite whiskey. The video was meant to act as a replacement for the traditional “yule log” video. They even encouraged other fans of Lagavulin to make their own video.

This A+ branding video got Lagavulin a lot of attention. And, the video continues to attract views each year.

Takeaway: What Lagavulin did so well was leverage a popular holiday tradition (the yule log) and inject their brand into it. Oh, and they had just about the perfect silent-spokesperson.

BIZZARE: KFC “The Taste That Unites Us”

It’s hard to call this marketing effort “naughty” or even ineffective. After all, it’s bizarre nature got a lot of people talking, even if not all the chatter was positive.

The campaign started with a video posted to social media channels and run during certain TV ad spots that depicted holiday shoppers fighting, kids accidentally breaking a window during a snowball fight and even a little boy having his own kind of accident on Santa’s lap.

Then, all of these angry parties come together over a holiday feast singing that, while they may hate each other, they can “all agree on the delicious taste of KFC.” The “KFC Choir” comes in at the end to really bring this bizarrely catchy musical number home.

KFC then encouraged followers to share their own stories about making holiday peace using the #UniteThisXmas hashtag on Twitter. KFC picked one winning submission and crafted them a unique song, with the help of the KFC choir, to help that individual resolve their holiday conflict.

While the song was pretty out there, it was overall successful. It blended social media with the TV advertisement in a good way. KFC also had their own site dedicated to the Unite This Christmas tag. However, a lot of people didn’t agree with the message and felt that KFC was coming after the sacred holiday dinner. Others just found the ad too weird to get on board with.

Takeaway: KFC took a risk and went the humorous route with this ad and it worked, sort of. Humor can really be hit or miss, especially when you are poking fun at holiday traditions. It’s a similar approach that Lagavulin took, but the whiskey company targeted a much smaller tradition than the big holiday feast.

H&M has historically been a great example of superb video marketing. Their YouTube channel is video after video of excellent brand messaging and engaging campaigns. In 2016, H&M teamed up with renowned director Wes Anderson to create a short, holiday-inspired film.

It even starred Adrien Brody. Come Together became the top video on YouTube just a day after its release, which created a ton of impressions and media mentions.

The film itself revolves around a train full of holiday travelers on Christmas morning that has been delayed by inclement weather and mechanical problems. Brody, the conductor, gets on the horn to inform the passengers of the delay, much to their obvious dismay, and alert them to a complimentary Christmas brunch.

Then, he sets about transforming the train’s cafeteria into a festive party for the travelers, particularly a young boy who is the most visibly distraught over missing Christmas morning.

The beauty of this branded video is in its subtlety. There’s very little mention of the H&M brand. It’s not the typical (and often over-the-top) clothing ads that loudly announce all of their new winter items.

Instead, it is a touching holiday story where the actors happen to be wearing H&M clothing. They focused on the sentiment behind their messaging, rather than their products.

Takeaway: Some of the success of this strategy can be attributed to having Wes Anderson and Adrien Brody attached to the film, sure. Yet, the essence of its success is the ability to effortlessly deliver a touching Christmas story (with very nostalgic themes), without jamming a brand name down the viewers’ throats.

In short: everyone loves a Christmas story and subtle holiday campaigns are often the best.

M&S and H&M have two things in common. One is obvious: they are both companies with two initials for a brand name. Second, they both tried to combine celebrity names, film, Christmas and their clothing products for a successful ad campaign. As we’ve seen, H&M was extremely successful in their endeavors. M&S, on the other hand, was not so lucky.

The video is plain weird and confusing, especially as it blends characters and themes from a number of different stories, like Alice in Wonderland, The Wizard of Oz, The Lion The Witch And The Wardrobe, Aladdin, 1001 Nights and others; most have zero to do with the holidays.

That said, it’s fairly subtle with its brand messaging. They even change the M&S (usually Marks and Spencer) to #MagicAndSparkle, to be more festive. Yet, despite being supported by a cast of actors and models, the holiday advert doesn’t capture the same holiday essence like H&M’s Come Together film does.

Takeaway: M&S wins with subtle brand messaging, but falls short by trying to inject these fairy tale themes into their holiday marketing. The holiday season is magical enough and sometimes it is better to lean towards simplicity over extravagance.

PoundLand is the UK equivalent of America’s dollar store. Last year, they really went for that lump of coal with one of the naughtiest holiday campaigns I’ve ever seen. Each social media post featured this elf in a more compromising position than last. The heavy sexual overtones had a lot of shoppers cringing and taking to social media in outrage. The ads were even lewd enough to cause the ASA (the UK’s Advertising Standards Authority watchdog) to ban them.

While the ads had a lot of people groaning and they were ultimately taken down, it did net PoundLand a ton of attention. Perhaps, and I’m only trying to give whoever was in charge of this marketing campaign the benefit of the doubt, the intention was to convert this negative press into sales with the hopes that people would overlook the misbehaving elf in favor of PoundLand’s ultra-low prices.

Whatever the intention was, once the ASA got involved, PoundLand was on a permanent naughty list.

Takeaway: Do I have to say it? Don’t do this – please.

The end of the year holidays present a crucial time for marketers. Studying these examples of naughty, nice and even bizarre holiday marketing efforts is a great way to not only gain some inspiration for your own campaigns but also give you insight into some of the things that really resonate with people during the holiday season.

My best advice is to think about what makes the holidays so magical for your brand and its audiences, whether they are young, old or somewhere in between.

Then, do your best to bottle that magic and deliver it to those audiences in a way that puts the holiday first and your brand messaging second. Often, the subtle brand messages work the best during the holidays.